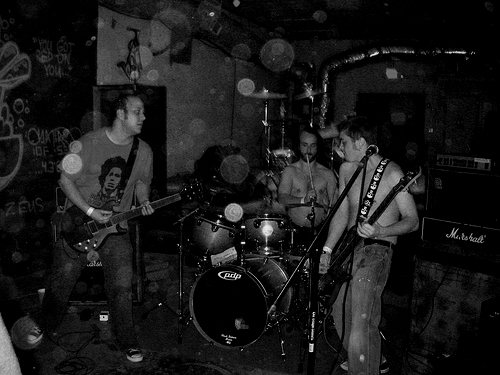 Sick Sick Sick is a punk band started in 2003 by Furman Fowler and Philip Baldy formerly of the Aiken punk band Thumbknuckle, and Preston Cox formerly of Augusta metal band Helen Keller's Pussy. They played their first Augusta show December 2003 at the Hangnail Gallery with the Cubists, Duck Duck Grey Duck and the Arrogant Sons of Bitches. The band has played over a hundred shows across the Southeast and a short tour to Texas in November 2005 with the Skuds. Matt Motherfucker joined as 2nd guitarist in 2005, but left the band in 2007 for personal reasons. Nick Green from Augusta band Beara replaced Preston in 2009.

2008 - A Wrench in the System compilation CD - Monkeywrench Records

Retrieved from "https://augustamusic.fandom.com/wiki/Sick_Sick_Sick?oldid=4171"
Community content is available under CC-BY-SA unless otherwise noted.